CTA is again a bit tricky to interpret. There is thrombus in the left ICA terminus given the abrupt cutoff of the left A1 segment (red arrow). There is lack of opacification in the left cervical ICA as well forming a layering contrast level (blue arrow) which as it turns out, is entirely flow related and due to the upstream occlusion. It somewhat mimics a dissection but the layering contrast is a bit too perfect (perfectly horizontal lines are typically the effect of gravity in radiology).

Perfusion images show a mismatched infarct with no core and large penumbra. 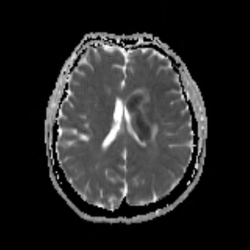